Pilot Is Under Investigation After Customer Called Out His “Offensive” Sticker 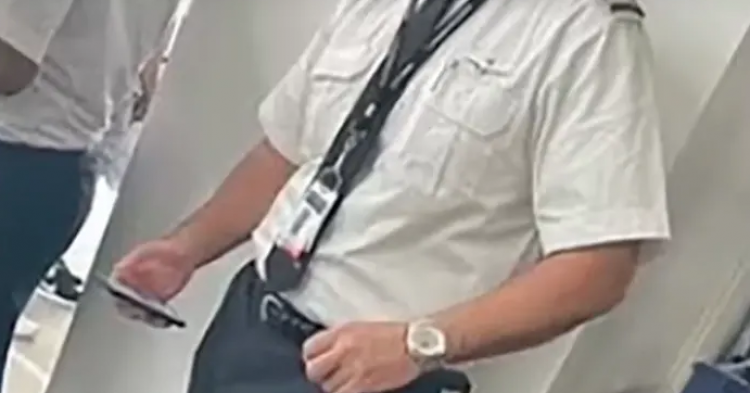 Dana Finley Morrison considers herself an open-minded individual. As a Missouri fraternity and sorority worker, she has dealt with all types of people on both sides of the political spectrum. But when she was flying on an American Airlines flight from St. Lucia to Miami on Saturday, she noticed something that simply terrified her and made her doubt her safety – the pilot was flaunting a “Let’s Go Brandon” sticker.

People who are in the know understand that “Let’s Go Brandon” is an anti-Biden message. The term first came into prominence when a NASCAR reporter misheard “F*** Joe Biden” chants and thought the crowd was shouting “Let’s Go Brandon.” The chant occurred during a race in September and has been turned into stickers that are popular among Trump supporters and people on the far right. 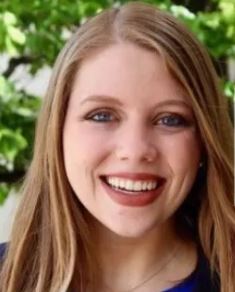 Morrison sent a tweet to American Airlines, writing: “Y’all cool with your pilots displaying this kind of cowardly rhetoric on their crew luggage when they’re in uniform, about to board a plane? We are not the only passengers who noticed and were disgusted.” 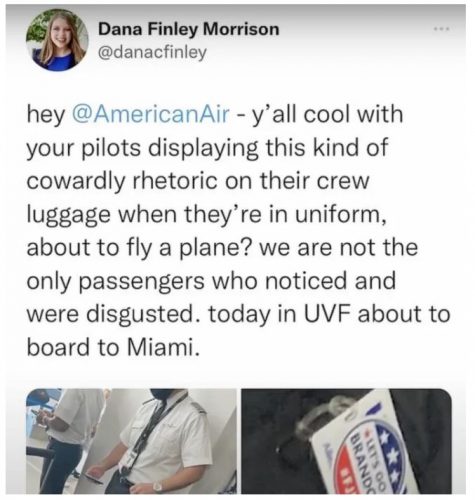 Instead of ignoring the incident, American Airlines decided to reply to Morrison’s tweet. They wrote back, “Thank you for bringing this to our attention, and we want to get this to the right team. Please DM any additional details.”

As a result, Morrison shared some screenshots of conversations she had with American Airlines employees. In one of the screenshots, the employee told Morrison that “We hold our team members to the highest standards and expectations.”

According to American Airlines policy, staff members, including pilots, can only wear pre-approved badges and pins. Pilots are limited to wearing three pins at one time. Now, the airline reported that the pilot in question is under investigation and could face serious consequences for promoting the conservative anti-Biden message while on the job. 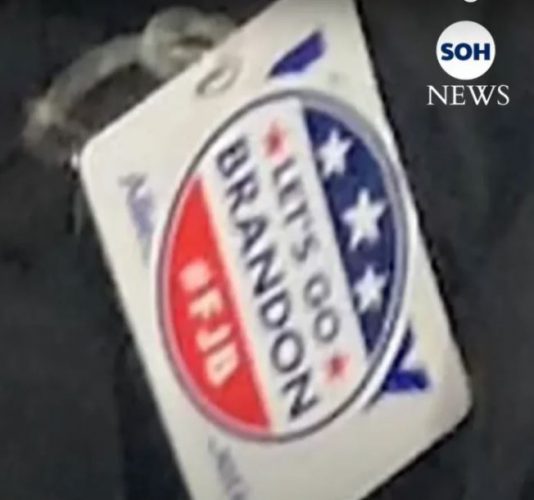 “Let’s Go Brandon” supporters are not happy with the airline for enforcing its code of ethics. Because the airline allowed pilots to wear Black Lives Matter pins in response to the Black Lives Matter movement to promote equal treatment of people of color, these critics feel that the Let’s Go Brandon pin should also be allowed – although it has nothing to do with oppression.

The airline explained their decision to allow the Black Lives Matter pin as follows: “American Airlines believes in equity and inclusion for all. In light of the appropriate attention to the lives of Black Americans, we will allow team members who wish to wear a Black Lives Matter pin to do so if they choose. We Believe Black Lives Matter. While American isn’t expressing support for specific organizations, we stand in solidarity with the movement for equality and justice for Black Americans who continue to experience racism and discrimination.”

Once again, the issue has a divided response from Americans.

Do you think the pilot should be punished or be allowed to wear the anti-Joe Biden propaganda?