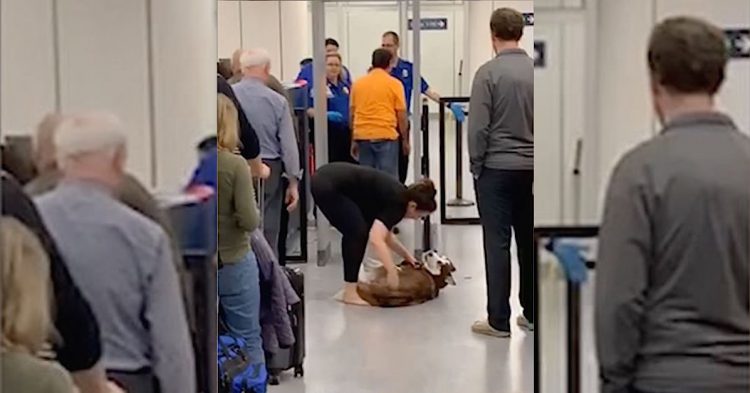 When a man decided to bring his dog on the plane, he ended up making things miserable for everyone. Because Joe Farma, was taking a trip around the holidays that required his family to travel through Orland International Airport on his way back home to Boston, he was in a hurry to get through security so he could make it to the gate in time to reach his plane.

However, he noticed that there was a massive Siberian husky sprawled out on the ground, which was making things difficult for everyone because the stubborn dog did not want to go through airport security. This meant that Joe Farma and his family were going to have to wait to get through security until the dog owner was able to calm the pooch down and get it through before everyone else. This is why people are working to ban all animals from planes except for those that are officially trained to act as service animals for people in genuine need of support.

Joe knew that the big dog was going to be a problem. That’s why he quickly took out his phone and started recording the incident. He figured that if he was enjoying it this much, people on the internet would also want to see how the dog reacted.

Although the owner of the husky begged the dog to get up and walk through security, the pooch refused to budge. The incident made Joe question who the owner was and who was the pet. If you asked the dog, the man holding the leash was the one who really had to serve the other.

Because the grumpy dog refused to obey the “master’s” commands, the entire security line was held up. No one was able to go ahead because the dog was too stubborn to pass through the security checkpoint. Perhaps, the pooch was scared of the metal detector. Or maybe it was just being difficult.

Joe was glad that he took out his phone to record the travesty. Because huskies are known for being vocal dogs, he managed to capture the pooch howling his complaints as he resisted the owner’s best efforts to pull the dog through the security checkpoint.

The dog was so expressive in its dissent that psychologist and dog expert Stanely Coren said that these dogs could “talk” in phrases that are actually quite close to their own form of “dog speak.” In other words, huskies are intelligent enough to communicate verbally.

Watch the hilarious footage below. What do you think about this stubborn husky at the Orlando International Airport? Would you have waited patiently behind it?