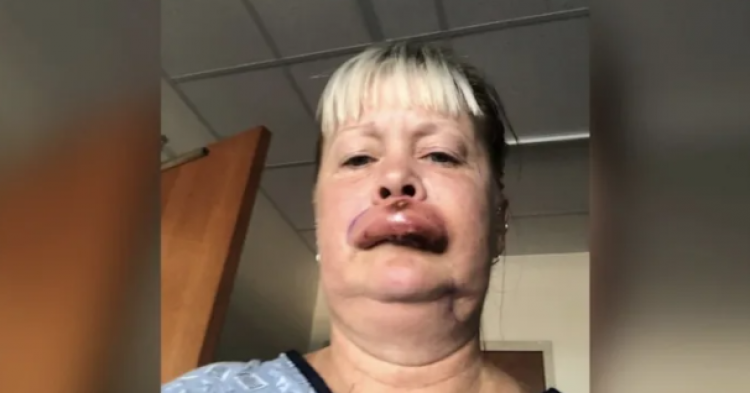 Sherri Maddox never thought her life would flash before her eyes because of a spider. But that’s exactly what happened to this Virginia woman. Maddox was bit on the lip by a venomous spider and soon found herself fighting for dear life as she battled through hallucinations and hospitalization to cope with the venom that was coursing through her body and making her lip swell up to multiple times its original size.

The spider bite occurred while Maddox was in the middle of a kayaking trip. She was taking a course through the Staunton River, which was a ten-hour kayaking trip when the spider bit her. At first, Maddox didn’t even realize that she was bitten by a spider, and she tried to ignore the pain. But as it would turn out, she had a lot to worry about because the spider that bit her lip was a brown recluse spider, which is highly venomous and dangerous.

The following day, the pain had gotten worse. That’s when Maddox decided to seek care from a healthcare provider and was prescribed antibiotics. However, the medicine did not work as quickly as she had hoped, and the area around her lip continued to swell. Before long, it was clear to Maddox and those near her that her problem was much more severe than they had originally thought.

“I’m almost 50, and I’ve been floating in the Staunton River since I could swim, six years old,” Maddox told Fox News. “I was just praying I wasn’t going to die because I hear horror stories, and you look on the internet and see all this stuff.”

She added, “They told me they weren’t sure if I was going to make it, and I thought I wasn’t going to live through the night when they first told me. It looked like a big ol’ balloon on my face.”

She was finally admitted into the hospital, and doctors quickly diagnosed her with a brown recluse spider bite. They treated it as such by giving her a dose of antibiotics to help kill off any remaining bacteria from the spider’s venomous fangs. Maddox also underwent surgery on her lip so that they could remove all of the dead tissue from the area.

The doctors told her that they weren’t sure if she was going to make it, and Maddox said in an interview with local news station WRIC:

“I thought I wasn’t going to live through the night when they first told me. It looked like a big ol’ balloon on my face.”

But, fortunately, Maddox did pull through and survived. Now, she feels extremely lucky to be alive today. She encourages others who find themselves in a similar situation as hers to seek help immediately so they can hopefully prevent something like this from happening again.

What do you think about this venomous spider bite?